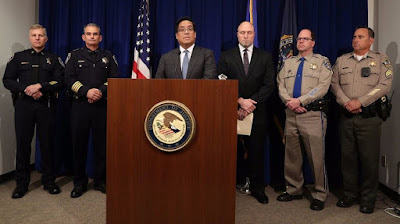 A gang initiation murder at a Fresno clubhouse. Drug heists. Stockpiles of weapons, including shotguns, a nail-spiked club, brass knuckles and bulletproof vests. Intimidation of a sexual assault victim.

Federal prosecutors on Monday laid out a string of alleged crimes carried out over the course of the last decade by nearly a dozen alleged associates of the Hells Angels motorcycle gang, including one on the East Coast. They were indicted last month by a grand jury, and the 11-count indictment unsealed Monday was the culmination of a three-year investigation that involved the FBI, the Santa Rosa Police Department, the Sonoma County Sheriff’s Department and the California Highway Patrol.

Since Saturday, authorities have searched 16 locations — including Hells Angels clubhouses in Santa Rosa and Fresno and a pet cemetery in Fresno — and seized 13 weapons, 10 motorcycles and drugs, said FBI spokeswoman Cameron Polan.


At least nine of the indicted have been arrested. Several were apprehended during a raid Saturday at the Wagon Wheel, a bar in Santa Rosa. Others were arrested in Fresno and Boston.

Prosecutors describe the group as a "transnational violent outlaw motorcycle gang" with long-standing ties to Sonoma County, where it has operated since the early 1970s. Members of the Sonoma County chapter, the indictment said, "promote a climate of fear" through intimidation and violence to promote their authority and dodge criminal prosecution.

The associates are being charged for crimes that date back to the summer of 2007, when Raymond "Ray Ray" Foakes, 54, allegedly helped carry out a mortgage fraud scheme to secure a home for a marijuana operation. Nine years later, Foakes allegedly sexually assaulted someone and threatened to harm the victim and the victim's family if they reported the assault.

In 2014, the indictment alleges, three defendants — Brian Wendt, 40, Jonathan "Jon Jon" Nelson, 41, and Russell "Rusty" Ott, 64 — lured an unnamed victim to the Fresno clubhouse, where Wendt killed the person. In 2015, Damien Cesena, 36, and Jeremy Greer, 37, allegedly carried out a home invasion robbery in which they stole marijuana from an unnamed victim.

"This week we have taken a significant step toward bringing to justice an alleged conspiracy whose aim has been to commit violent crimes," U.S. Atty. Brian J. Stretch said in a statement.
http://beta.latimes.com/local/lanow/la-me-ln-hells-angels-indictment-20171120-story.html