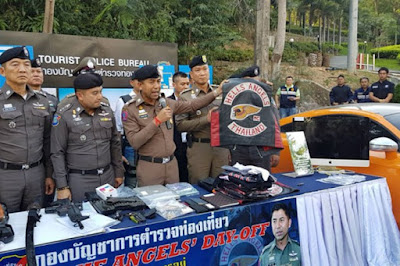 Police on Wednesday arrested and charged four foreigners – believed to be members of the Hells Angels motorcycle gang – with several criminal offences, and plan to deport and blacklist them from the country.

Pol Maj Gen Surachet Hakpal, acting deputy commissioner of tourist police, said police raided five luxury houses in tambon Nong Prue of Bang Lamung district. Police were searching for eight foreigners who were believed to be members of the gang in Pattaya, and arrested four of them.
Pol Maj Gen Surachet said that police arrested three Australians and a Canadian. He would not reveal their names, but said they were aged between 32 and 42. Police also seized guns, ammunition, knives, an Audi sports car and a Ford GT 315 car. The suspects’ urine was tested, and police found traces of illegal drugs in two of the samples.

“Some members of the Hells Angels gang were disguised as tourists and threatened national security as they were involved in extortion, money laundering, illicit drugs and human trafficking. They were the same group of people involved in the murder and secret burial of an Australian two years ago,” Pol Maj Gen Surachet said.
“These people entered Thailand, married Thai women, were without regular jobs, but had luxury houses and cars and spent lavishly,” he said.
Police revoked the permits and visas of the eight targeted foreigners. Of the four still at large, one fled the country and three others were hiding in Bangkok, Pol Maj Gen Surachet said.

The two foreigners found to have abused drugs would face punishment in the country before being deported, he added.
He said police would not tolerate seeing criminals riding Harley-Davidson motorcycles around Pattaya with impunity.  Source: Bangkok Post

Thai members of the Hells Angels motorbike club have dismissed claims by a former member that he was beaten by Australian members after he went to police and press earlier this week. 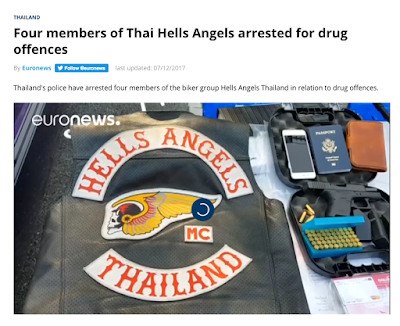 Thai Police have arrested four members of the biker group Hells Angels.
The men are being held on drugs charges amongst other offences. They are also being held in connection with the murder of a former member of the group in 2015.

Australian Wayne Schneider was found murdered two years ago. His killer, another Australian, was sentenced to death in February.  Thai police suspect this attack was due to Schneider's links to the drugs trade.

The four arrested men include three Australians and a Canadian. A fifth man who is British has fled the country.

The men were arrested in Pattaya, a tourist resort 100km from Bankok.
Local police say two of the accused gang members who tested positive for illegal drugs would be deported.

Authorites have yet to identify the men. They say they are still looking for three more Australians in connection with the crimes.
http://www.euronews.com/2017/12/07/thailand-four-members-of-thai-hells-angels-arrested-for-drug-offences 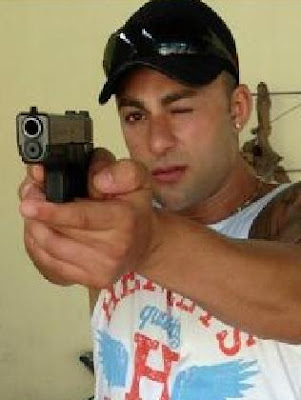