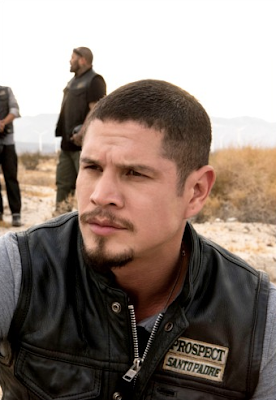 The 'SOA' spin-off focusing on JD Pardo's Ezekiel 'EZ' Reyes, a prospect in the Mayan MC charter, is expected to premiere this summer or in early fall.

The long-in-development "Sons of Anarchy" spin-off, "Mayans MC", will finally see the light of day. Coming from "SOA" creator Kurt Sutter and Elgin James, the project has received a 10-episode series order at FX.

The series pickup was announced at the Television Critics Association's winter press tour on Friday, January 5. The new series is expected to premiere sometime later this summer or in early fall to coincide with the 10th anniversary of the 2008 premiere of "SOA".

"Kurt Sutter is a master storyteller and 'Mayans MC' has the raw energy and intensity that are hallmarks of his signature style," Nick Grad, FX's president of original programming, says in a statement. "Thanks to Kurt, co-creator Elgin James and this amazing cast, 'Mayans MC' builds on the legacy of 'Sons of Anarchy', taking it in a thrilling new direction that we can't wait for the world to see."

The series order comes after the pilot underwent a reshoot and recasting of some key roles. "Mayans MC" is the latest FX drama to land a series order after retooling the pilot, joining the mothership series "Sons of Anarchy" and "Snowfall".

"Mayans MC" is set in the aftermath of Jax Teller's (Charlie Hunnam) death at the end of "SOA" seven-season run in 2014 and will focus on the struggles of Ezekiel "EZ" Reyes (JD Pardo), a prospect in the Mayan MC charter on the California/Mexico border. EZ is the gifted son of a proud Latino family, whose American dream was snuffed out by cartel violence. Now, his need for vengeance drives him toward a life he never intended and can never escape.

Also at the TCA, FX gave an update on the future of "Fargo". FX chairman John Landgraf said that a fourth season of the anthology crime drama series is on the way for a 2019 premiere. "It's not gone," he told reporters. "Noah Hawley [series creator], who has become quite a busy bee... has told us that he has an idea that excited me enormously for a fourth cycle of 'Fargo' and the plan is to have that ready in 2019. The anticipation is there will be another cycle of 'Fargo' in 2019."

Hawley, who also serves as showrunner on FX's "Legion", jokingly said, "I'm finally doing the 'Space Station Fargo', it's going to be amazing," before adding, "Unfortunately, I can't really tell you anything about that."

He went on sharing, "I will tell you the next thing you'll see of 'Fargo' is going to be a book that looks at the [previous] three seasons with scripts, interviews and everything that I'm doing with [my publisher] Grand Central. We're working on that now, so hopefully that'll come out before the fourth [season]. It's still early for me. I really love that world. But it's still very much a question for me of making sure there's something left to say about it, and balancing tone. I never want it to be something that people go, 'Oh that thing, it's the accents and the funny crime show.' Yeah, it's still very much a work in progress."
https://www.aceshowbiz.com/news/view/00116603.html
Upplagd av MC Razzia kl. måndag, januari 08, 2018