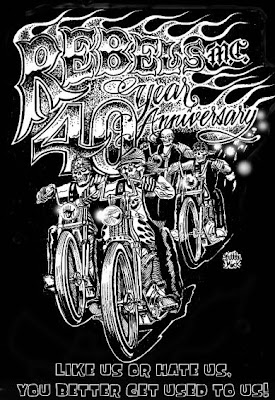 Australia's largest outlaw motorcycle club, the Rebels, has decided to go ahead with its 40th anniversary celebrations in Brisbane, despite incoming tough anti-bikie laws.

Due to be held at its Albion clubhouse, rebuilt after being firebombed in a war with rival club the Bandidos in 2007, the Rebels have scheduled the anniversary party for September 26.
http://www.brisbanetimes.com.au/queensland/rebels-go-ahead-with-40th-anniversary-party-20090824-evwm.html